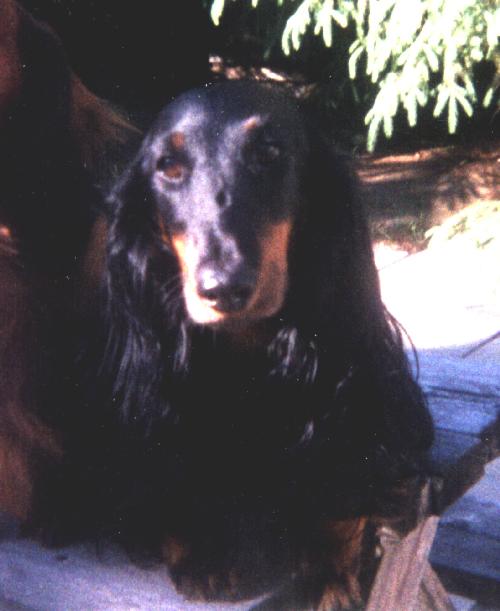 
These hands that lovingly received you from your mother at 2:29 p.m. on September 8, 1993, when you weighed 270 grams, held you and lovingly kissed you as you left our world and crossed the Rainbow Bridge. Your mother, Dasher, had saved her very best for the end - you were her last pup of her last litter. Your glowing black and tan coat, flashing eyes and smooth motion made you one of the best show Dachshunds. When you were 7-1/2 months old, I took you to your first dog show, and you won the coveted Best Puppy in Show award. By the age of 10-1/2 months, you had completed your Canadian Championship. At 14 months of age, you won a 5-point major at the Dachshund Club of Greater Buffalo specialty show, and a few months later you were "in the ribbons" at the Dachshund Club of America National Specialty show weekend at Louisville, KY.

Then, illness struck in the form of an immune-mediated disease. We were devastated, and while that ended your show career and the possibility for breeding, your place in our house and lives was never in doubt. You were my constant travel companion; I took you with me on business trips as well as vacations. You often visited our children's schools and allowed all the children to pet you, even when they all surrounded you. Our children had a check-off system as to who would have you for their sleep-mate.

You were a determined little girl. How often you sat bolt upright, just like a groundhog, and, with flashing eyes, barked to demand a tidbit. Every day you led the charge to the spot where you thought the squirrels were. You were not above mischief; there is still a chewed out piece of the upholstery in the trailer where you expressed your displeasure at being crated when we were camping. Last summer you and Stormy literally trashed the interior of the trailer while parked in Toronto because somebody kept looking in and tapping on the window thinking that you were overheated (they didn't notice that while all the windows were closed, the air-conditioner was running). How I laughed when you startled Freddy, one of our clients who had leaned over to kiss your nose while I was repairing his computer and you barked at him; he lost his balance and almost knocked over a file cabinet when he jumped back. And weren't you and your mother Dasher the culprits when we realized that we weren't getting any tomatoes from the garden because you were eating them as they ripened on the vine.

Every morning when the alarm went off, you would go to Mummy's pillow, stand on her hair and lick her face to wake her. You had figured out that I might ignore your early pleas for breakfast, but Mummy was really the boss.

When you came up from the ICU unit to say goodbye to me, I was struck by your serene beauty. I knew how sick you really were, and that there was no hope of recovery, yet you faced the end stoically with a majesty and beauty that I will never forget. Your final place of rest is on a hillside overlooking a lake near Battersea, along the Rideau waterway. There you and the other Dachsies can chase rabbits and groundhogs.