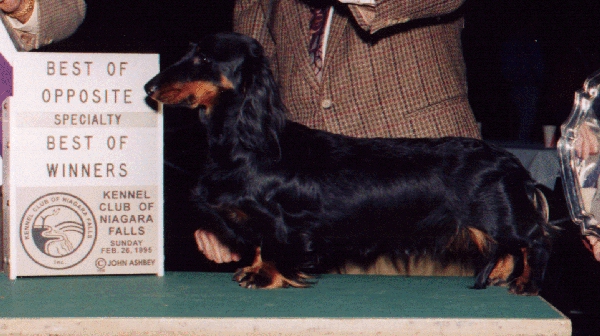 Maggie won Best Puppy in Show at her very first show under Judge Walter Pinsker at the Ottawa Kennel Club. By age 10 months, she had finished her Canadian Championship. At 14 months of age, at her first American Specialty Show, a Dachshund Club of America sanctioned event held at Niagara Falls, NY by the Dachshund Club of Greater Buffalo, Maggie picked up a 5-point major by going Winner's Bitch, Best of Winners and Best of Opposite Sex to Best of Variety. Maggie was also "in the ribbons" at the weekend of the Dachshund Club of America National Specialty Show held in Louisville, KY.

Here is the whole picture of Maggie.